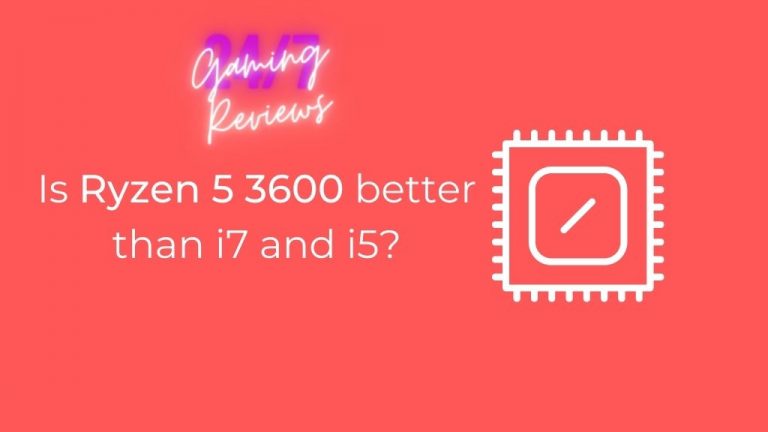 AMD and Intel could be defined as the El Clásico of the computing industry. Both these tech giants fight against each other to come up with the best processors.

AMD’s Ryzen 5 3600 has made waves around the world with its remarkable statistics that guarantee a very smooth lag-free performance.

On the other hand, Intel’s 9th and 10th generation i5 and i17 processors have given tough competition to all others in the market.

Even though both the manufacturers have done a great job with producing outclass processers that have upped the game in the technology industry, for an average user it is imperative to know which amongst the two they should go for. Read till the end to make up your mind as we drill down to the basics of both the processors. Ryzen 5 3600 is usually compared with Core i5-10400 and Core i7-9700K, therefore we’ll use both these chipsets as a point of comparison.

The higher-end i7, however, does match the base clock speed of the 3600. When it comes to overclocked speeds, Intel seems to have an edge over AMD. Ryzen 5 3600 overclocked speed reaches 4.2GHz at maximum, however, the i7 can go up to 4.9GHz and the i5, 4.3Ghz, thus pledging for very optimum performance even in the most complex tasks.

Gamers are one of the most important segments of the computer and tech industry. Manufacturers try to inculcate those features into their products which helps satisfying gamers. The Ryzen processor we’re discussing at the moment has been one of the top-favorite for gamers (particularly entrée level gamers).

The i5 lacks behind when it comes to gaming. Not only is the i5 lacking in providing enough power to assist in lag-free gaming, but also it does not support 1080p high gaming, which sends it downward in gamers’ priority lists. The i7, however, gives very tough competition to the 3600.

Despite being an older processor, the i7 has proven to provide great performance, even on newer games such as Call of Duty: MW, Fortnite, and Overwatch. Not only do you get a better clock speed, but games are playable at a higher FPS rate on the i7 than the 3600.

Intel processors come packed with the UHD 630 Graphics Card, which though not the best but can support a certain degree of gaming. On the other hand, AMD has been quite a miser in this regard as the 3600 comes without a graphics card.

AMD has always been a step ahead when it comes to the technology at the offer. The processor’s lithography shows this. Both the Intels have 14nm chips in them whereas AMD has placed the all-new 7nm chips in their processor making it a much better choice.

When it comes to supporting motherboards, the Ryzen 5 3600 yet again outweighs the i5 and i7 because of the fact that it supports much better AM4 motherboard sockets. You can see for yourself the best motherboards you can pair up with the AMD Ryzen 5 3600 to take the performance to a whole new level. The B450 motherboards that aid the swift performance from AMD’s processors are also quite ahead of their time, check them out here.

Benchmark scores also clearly indicate that Zen2 rules Comet Lake and Coffee Lake when it comes to CPU performance, thus making the AMD a better choice in this regard too.

Budget and price constraints can always lead to a complex situation where the user ends up purchasing the wrong processor and regrets their decision immediately. You should keep the prices and other related expenses of a processor in mind while you purchase one.

As far as the price is concerned, you can get the 3600 for $209 on Amazon. Searching in detail on different websites and other markets may allow you to get a better price, but in general, the price range varies between $170 – $210. The i5 is comparatively cheaper than the AMD with a price tag of $165, but the i7 is a lot more damaging to the pocket and outweighs the price of both, the i5 and 3600 with a tag of $299.

Other than the price itself, you may also be concerned about the doodads that come with each processor. Ryzen 5 3600 comes packed with a default cooling system; however, its efficacy is pretty doubtful and according to many users a newer and better performing cooling system should be procured if you are a heavy user. Intel’s processors come without any cooling systems so set aside a few bucks for purchasing a cooling system if you are inclined towards Intel.

As mentioned before, you may have to spend a few more dollars on a graphics card if you get AMD’s 3600 since it does not come with one out of the box.

All these processors are great, you could assess them on various grounds and you will realize how both these tech giants have manufactured absolute beasts. Apart from that, they’re very close competitors as well. Deciding on which amongst them is the best, could be tricky.

But one thing is for sure, the AMD Ryzen 5 3600 is quite ahead of the i5, be it technology-wise, performance-wise, or features-wise. With the i7, however, making a decision could be more difficult and it is recommended that you evaluate your usage and then make a decision as i7 is going to be good only if you are an extremely rough and tough user, otherwise the 3600 should suffice.